Showing posts from May, 2012
Show all
- May 31, 2012
Blind activist hits China’s commitment to rule of law
The blind Chinese civil rights activist who escaped from house arrest in April says China's government needs to stop trying to “put a lid” on its problems and pretending they don’t exist.
Post a Comment
Read more
- May 29, 2012
Diplomats from Syria expelled by U.S., alliesInternational outrage over violence in Syria neared the boiling point Tuesday as the U.S. and other Western nations expelled Syrian diplomats for Friday’s massacre of at least 108 people, mostly women and children, in a western village in the strife-racked country.
Post a Comment
Read more
- May 26, 2012
Sentencing of doctorA US Senate committee on Thursday cut $33 million in aid to Pakistan to protest against the prison term for a Pakistani doctor in Peshawar who helped lead the CIA to Osama bin Laden.
Post a Comment
Read more
- May 24, 2012
U.S. slams Pakistan for jailing doc who led CIA to Osama The Obama administration and US lawmakers on Wednesday reacted angrily to news that a Pakistani court had sentenced a doctor, who helped the CIA locate Osama bin Laden, to 33 years in prison.
Post a Comment
Read more
- May 23, 2012
Sikhs in US hail passing of Anand Marriage BillIndian American Sikhs on Tuesday welcomed the Indian Parliament’s decision to pass a Bill that allows Sikhs to register their marriages under the Anand Marriage Act. The Rajya Sabha unanimously passed the Anand Karaj Amendment Bill on Monday, and on Tuesday the Lok Sabha approved the legislation with a voice vote.
Post a Comment
Read more
- May 23, 2012
Pakistan convicts doctor who helped bin Laden raidA Pakistani doctor who helped the CIA find Osama bin Laden was convicted of treason Wednesday by a Pakistani tribal court that sentenced him to 33 years in prison and fined him $3,500.
Post a Comment
Read more
- May 22, 2012
Fleeting Obama-Zardari meet puts spotlight on frosty ties The fleeting interaction between US President Barack Obama and his Pakistani counterpart Asif Ali Zardari at the NATO Summit in Chicago on Monday served to underscore the frosty relationship between the two countries. 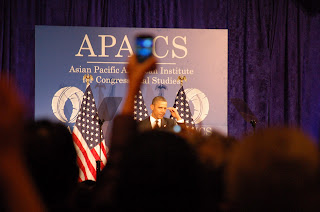 Obama cites Punjab-born Saund to laud Asian contributionUS President Barack Obama on Tuesday heaped praise on Punjab-born Dalip Singh Saund, the country’s first Indian-American member of the Congress. In his address at the annual gala of the Asian Pacific American Institute for Congressional Studies, the US President described the late Saund as a “trailblazer”.

Photo credit: Ashish Kumar Sen  President Barack Obama at the Asian American Pacific Institute for Congressional Studies gala in Washington, D.C.
Post a Comment
Read more
- May 08, 2012
Lawyer: Clinton to decide Iranian exiles’ fate after they moveSecretary of State Hillary Rodham Clinton will decide on removing an Iranian dissident group from the U.S. list of foreign terror groups only after all its members have left a camp north of Baghdad, a Justice Department lawyer told a federal court Tuesday.
Post a Comment
Read more
- May 07, 2012
South Sudan envoy: Sudan is warmongeringA top South Sudanese official on Monday said Sudan is violating a U.N. ultimatum to halt the fighting that has brought the two African neighbors to the brink of an all-out war.
Post a Comment
Read more
- May 03, 2012
Obama ensnared in mystery of Chinese dissidentThe Obama administration Thursday found itself on the defensive over its handling of a blind Chinese dissident at the center of a diplomatic firestorm between Washington and Beijing, as confusion over the fate of Chen Guangcheng only deepened in both capitals.
Post a Comment
Read more
- May 02, 2012
Sudanese conflict creates land of the lostThe “Lost Boys” of Sudan walked for months over punishing terrain and waded across rivers teeming with crocodiles to get to refugee camps in neighboring countries.
Post a Comment
Read more
- May 02, 2012
Taliban-US peace efforts create rift in ranks of terror outfit US-led efforts to make peace with the Taliban have created turmoil in the ranks of the militant group, deepening rifts between those in favour of reconciliation and those determined to continue the war, according to US and Afghan officials.