In an election season in which Georgia’s NATO aspirations have been hotly debated, Georgian Prime Minister Giorgi Kvirikashvili insists that his country’s European choice is “irreversible.”

“An overwhelming majority of the people of Georgia consider the goal of joining EU and NATO to be a necessity that will lead to a higher standard of democracy, security, peace, and prosperity in our country and region,” Kvirikashvili said in an interview. 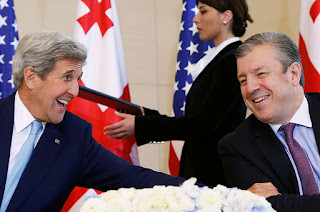 It’s Time for the U.S. To Rethink North Korea Policy

- September 10, 2020
A little over a year ago, U.S. President Donald J. Trump’s third meeting with North Korean leader Kim Jong Un was making headlines as much for its historic nature—it was the first time that a sitting U.S. president had set foot in North Korea—as for what it represented about the lack of progress in U.S.-North Korea relations. The next U.S. administration, whether it is led by Trump or former Vice President Joseph Biden, will face a more emboldened regime in Pyongyang and, according to experts, must rethink past failed strategies for dealing with this challenge.
Read more

How The West Was Won

- August 17, 2010
Ages before the technoboomers, there came the first pioneers. Riding out West armed with just grit, they built their El Dorados from scratch.
Read more