Zalmay Khalilzad served as the US Ambassador to Iraq, Afghanistan, and the United Nations in the George W. Bush administration. A member of the Atlantic Council’s Board of Directors, Khalilzad has recently authored an insightful and widely praised memoir—The Envoy. In a wide-ranging interview with the New Atlanticist’s Ashish Kumar Sen, he discussed the lessons learned from the US experiences in Afghanistan and Iraq, prospects for peace with the Taliban, and US diplomacy in a post-Iran nuclear deal Middle East, among other issues. 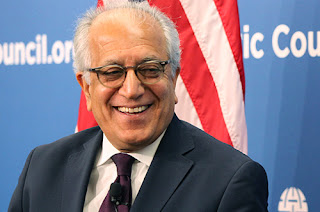 "The right lesson to learn from Iraq and Afghanistan is that big projects such as these two need to be done very selectively and rarely, we also need to recognize that we might have to do them again,” said Zalmay Khalilzad, a former US Ambassador to Afghanistan and Iraq. Khalilzad is a member of the Atlantic Council’s Board of Directors. (Atlantic Council/Victoria Langton)
Afghanistan Atlantic Council Iran Iraq U.S.

- July 22, 2021
Despite the many challenges facing the continent, “Africa is not … defined by poverty, misery and violence,” said Félix Tshisekedi, the chairperson of the African Union (AU). “Our continent is also defined by opportunities.”
Read more

Russia’s War in Ukraine Is Taking a Toll on Africa